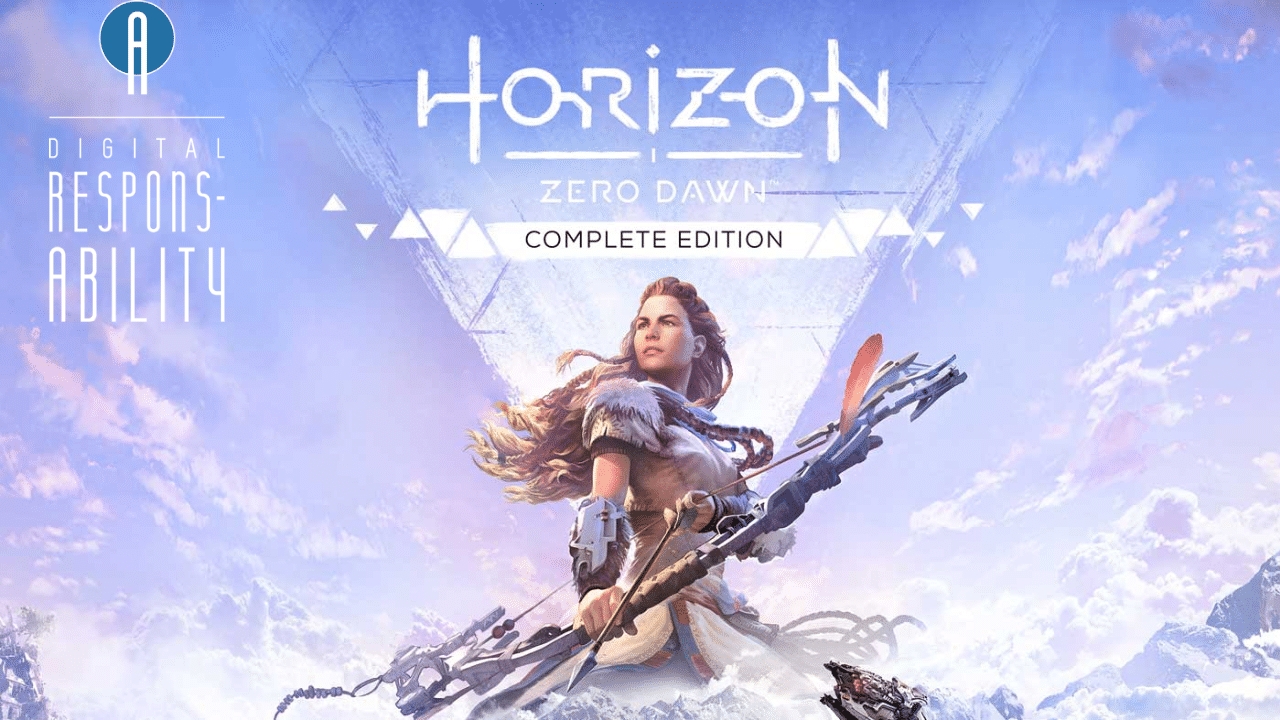 Horizon, an open world action/adventure game with a strong female protagonist. A review with Parenting in mind.

Beautiful, mysterious and with a strong female protagonist and characters, Horizon: Zero Dawn is a great addition to action adventure games.

When my family started Horizon: Zero Dawn with it’s red-haired survivor hero, Aloy, I was thinking it was set in the prehistoric past. Then came the machines and computers strewn across bountiful and beautiful landscapes. The story is not set in the past, but a distant future where technology has ravaged the world, but vestiges of it still roam dangerously around.

When the PlayStation game was released in 2017 it received high praise and many awards. While the game is a few years old, it’s expansion pack and development of a sequel have continued to keep players engaged.

The game is set in the third person as you play Aloy, navigating through dangerous animal machines, warring tribes, bandits and mysteries. The map is large and one can just enjoy themselves hunting, exploring ruins and honing their skills with various projectiles and other weapons. My criticisms of the game are around the sometimes clunky fighting and weapons. Don’t start Horizon: Zero Dawn unless you invest a fair amount of time getting character skill points and learning the different fighting techniques and moves.

Horizon: Zero Dawn is rated T for Teen on ESRB. The reasoning for that review is blood, violence, swearing and references to drugs and sexual activity. The rating is fair, but the blood and violence is pretty limited. Much of the violence is against machines with splatters of sparks instead of blood. Over 20 hours into the game so far we haven’t seen anything concerning for our elementary-aged kid and he has not been scared or nervous about anything–with the notable exception of the game’s hunting requirements and the shooting deaths of cute animals.

For players, like our family, wanting more of Horizon’s fascinating world, an expansion to Horizon: Zero Dawn titled The Frozen Wilds was released in November 2017. Players are also hotly anticipating the sequel, Horizon: Forbidden West, set to be released later in 2021.

Horizon: Zero Dawn has only light violence and mature themes and should be appropriate for more children.

The intricate and beautiful world, mysteries of the past and fun and fast-paced fighting leads our family on the edge of it’s seat and eager for more. 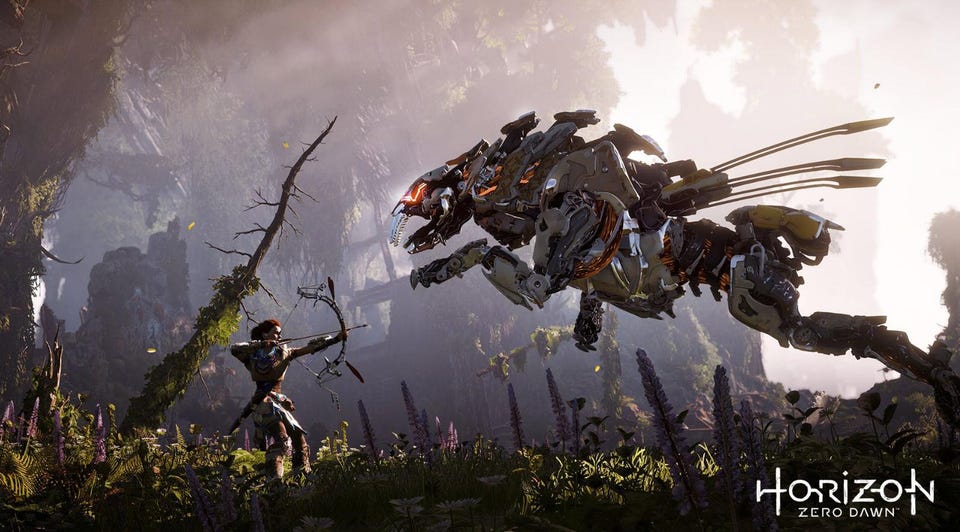 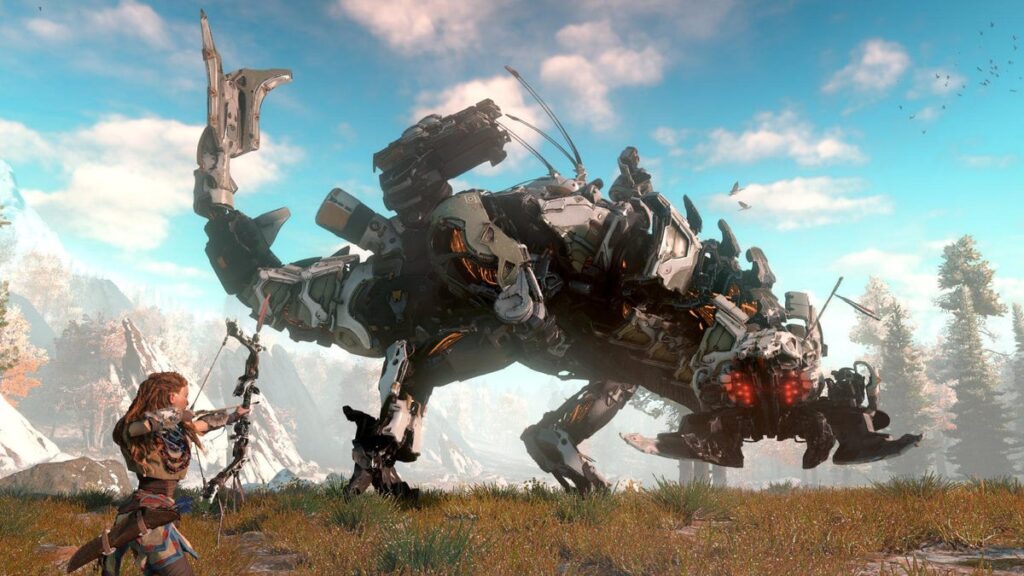 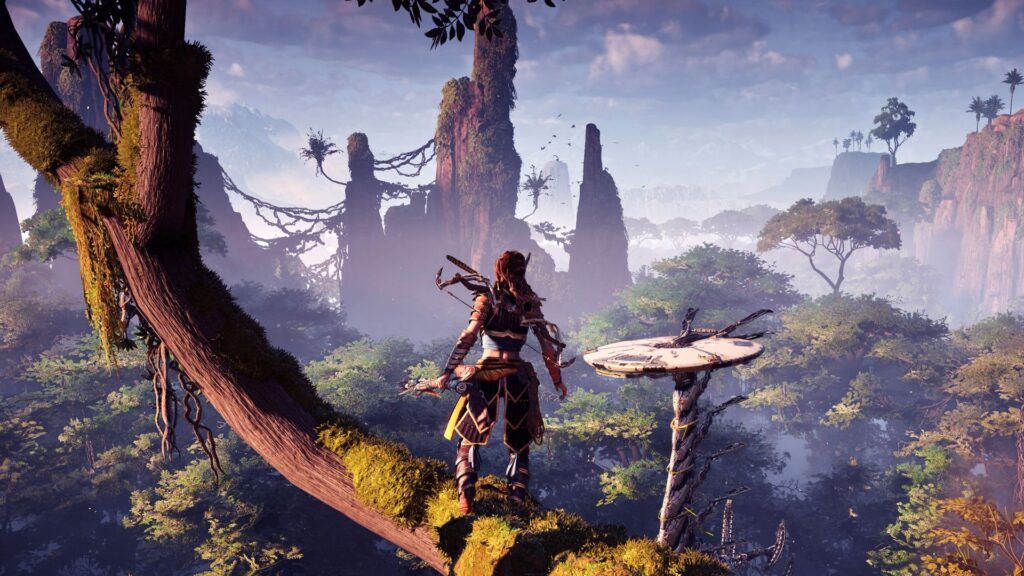